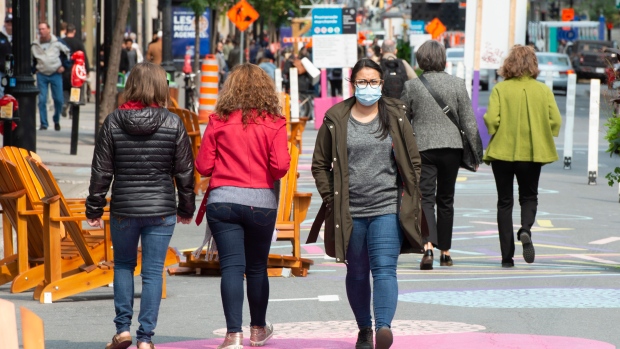 TORONTO — Health officials say the surge in new COVID-19 cases across Canada is largely due to an increase in public gatherings and are warning Canadians to limit their social interactions.

While public health restrictions allow up to 50 people to gather in some provinces, University of Toronto epidemiologist Ashleigh Tuite says that does not necessarily mean Canadians should get together in groups that large.

“This is absolutely attributable to people interacting more and getting out more, whether that be in businesses that have reopened — we’ve seen bars and restaurants open across the country — or whether it’s more informal gatherings,” Tuite told CTV’s Your Morning on Wednesday.

“But just because we can doesn’t mean that we should be having these large gatherings.”

Indoor gatherings of up to 50 people are permitted in most provinces, with exceptions in Saskatchewan, Quebec, P.E.I., Nunavut and Northwest Territories. Across Canada, the permissible size of outdoor gatherings varies from 20 up to 250 people.

However, Tuite said Canadians may be exceeding the limits.

“When we see these rules around gathering sizes that are quite large, people will first of all think that that’s appropriate and second of all, they’ll push those boundaries potentially,” she explained.

Tuite said that since coronavirus cases were “relatively dormant” during the summer and the weather has stayed warm into fall, Canadians are more inclined to gather with friends and family.

“There’s absolutely this sense that well, ‘If I have a couple extra contacts with people who I haven’t seen in a while, it’s not going to really matter.’ The challenge is that if everybody thinks that way, it does matter, and that’s what we’re starting to see right now,” Tuite said.

Across the country, 793 more COVID-19 cases were confirmed on Tuesday, bringing Canada’s total number of confirmed infections to over 138,800.

Canada’s top doctor issued a stern message in response to the rise on Tuesday, urging Canadians to do their part to change the trajectory before it is too late.

“The key message is that the time to act is now across the board in terms of reducing some of the contacts you’ve had over the summer months,” Chief Public Health Officer Dr. Theresa Tam said at a press conference in Ottawa.

She also reminded Canadians to take precautionary measures if they must gather in groups, including having hand sanitizer readily available, wearing masks or other face coverings, and cleaning common areas before and after the event.

As winter weather sets in and children return to school, Tuite said Canadians will have to start editing their social circles.

“The reality is that right now, as we’re moving into the colder weather and as we’re starting to see this increase in cases, we really want to keep those gathering sizes down because we know that large groups of people together… [In those] sorts of settings we do see COVID spread more rapidly,” Tuite said.

Dr. Michael Ryan with the World Health Organization (WHO) echoed the same sentiment on Tuesday, saying during a press conference that people are going to have to make trade offs amid a potential second wave of the pandemic.

“I do think there’s a time for decision-making coming, as the season rolls into the winter months for many, many countries, and there are no correct answers and I think the risk management approach is the only way to go,” Ryan said.

“Unfortunately, sometimes when you do this, you can’t do the other. You have to make those decisions,” he added.