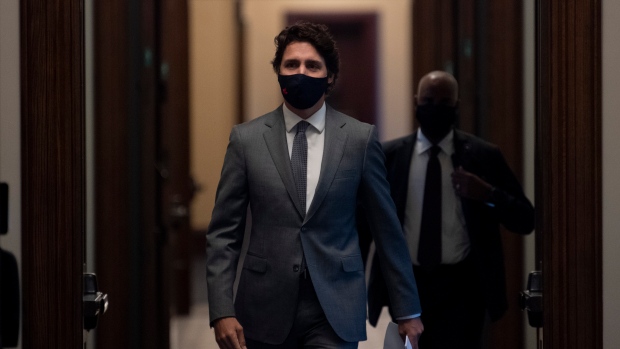 OTTAWA — Prime Minister Justin Trudeau says he doesn’t want an election — but if one is held, Canadians should feel confident that Elections Canada is capable of delivering a fair process despite the pandemic.

Trudeau made the comments during a Wednesday press conference, speaking after three days of meetings with his ministers and experts at a cabinet retreat.

“I think it’s irresponsible to say that an election would be irresponsible. Our country and our institutions are stronger than that, and if there has to be an election, we’ll figure it out.”

Trudeau’s government will be delivering its throne speech next Wednesday, providing an outline of his government’s plans for the upcoming parliamentary session. MPs will then vote on the plan — a vote that, if it fails, will trigger an election.

Earlier in the press conference, Trudeau spoke about whether an election could be completed effectively despite the ongoing COVID-19 pandemic — which spurred the later request for him to clarify whether he’d support an election.

“I think I should, and we all should, have tremendous confidence in Elections Canada to be able to bring forward strong measures to keep us safe and allow for the expression of the democratic will of the people.”

So far, no party has committed to supporting the throne speech. If Trudeau’s government doesn’t find that support, it’s possible the government will fall — and an election will be triggered.

“I know that Canadians want their politicians to be focused on them and their well-being, and I know that all opposition parties want to do a good job of representing Canadians in their views and concerns, and they will look at the throne speech with that in mind,” Trudeau said.

NDP Leader Jagmeet Singh said on Tuesday that he has a conversation scheduled with the prime minister this week to discuss his party’s priorities for the throne speech, as well as the things they’d need to hear to support it. However, he said the content of the throne speech matters less than the implementation.

“I’m worried that they’ll be empty words, because again and again we’ve seen this prime minister and this Liberal government talk about things but then never act on them,” he said.

Meanwhile, the logistics of how MPs will vote in the new session are also up in the air — and the clock is ticking. With the speech scheduled for a week from now, the entire Bloc Quebecois caucus is currently in self-isolation after a staff member tested positive for COVID-19. Conservative Leader Erin O’Toole is also self-isolation as he awaits the result of his own COVID-19 test, as a member of his staff tested positive.

Both these developments have the government considering how MPs can still vote on the throne speech from home. Trudeau said Wednesday that it would be “extremely unfair” if the government can’t find a way for remote or isolating MPs to say their piece.

“That’s why we’re going to be moving forward with a form of distance voting that will allow every parliamentarian to make sure that their community is heard, as we move forward on important measures,” Trudeau said.