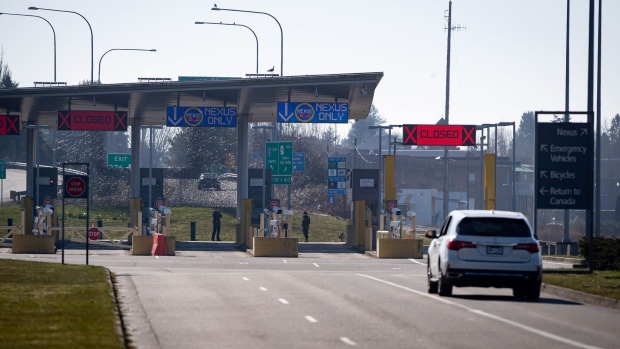 TORONTO — For many Canadian border communities, the closure of the Canada-U.S. border due to COVID-19 has had serious economic consequences.

But one Ontario border city mayor says he’s “absolutely” in favour of the continuing restrictions on cross-border travel, largely because of the way the U.S. has handled the pandemic.

“The situation in the United States is getting worse,” Fort Erie Mayor Wayne Redekop told CTV News Channel on Wednesday. “There seems to be no regard for the health and safety of others.”

The U.S. is the country with the highest number of COVID-19 cases and deaths, with more than 6.5 million cases and more than 195,000 deaths as of Wednesday.

Redekop added that Ontario has experienced “a bit of an uptick” in cases recently.

“So at this stage of the game, it doesn’t make sense to be lifting the border restrictions,” he said.

His comments come after senior government sources told CTV News that the border restrictions are expected to be extended until November.

In August, the restrictions were extended until Sept. 21, which was their fifth renewal since the border was first closed in late March. The restrictions mean that tourists and non-essential cross-border visits are prohibited, although trade is unaffected.

Redekop is far from the only mayor presiding over a border town to give his input. A group of border city mayors spoke to Canada’s Public Safety Minister Bill Blair last week, urging the federal government to keep the Canada-U.S. border closed to non-essential travel until it is safer.

“He was very receptive to listening to us and committed to continuing the dialogue and engaging us in the decisions made going forward,” Redekop said. “We particularly indicated to him that it would be helpful if there was an exit strategy established, so that at some point in time, in the future, when the border restrictions will be eased, that at least there’s a plan going forward.”

It’s not that Fort Erie hasn’t been affected by the closure, Redekop said.

“It’s affected our community just like it has with all of the communities along the border,” he said. “In terms of tourism, in terms of restaurants, in terms of retailers, that’s had an impact on us. Fort Erie is right across the border from Buffalo and western New York, there’s frequently a healthy movement of people across that border. Many Americans own property in our community. Some Canadians own property in the States, so that’s been interfered with.”

He added that one of the major issues is when family members are unable to visit across the border, meaning there can be situation “where there is someone who is ill or perhaps dying on one side of the border and family can’t visit from the other.”

That’s one of the reasons why Windsor Mayor Drew Dilkens is interested in looking at exemptions, and creating a formal process to allow families to cross the border for compassionate reasons.

Although the majority of border city mayors agree in extending the border closure, some, like Dilkens, would prefer a month by month check-in to assess the situation, while others, such as Sarnia Mayor Mike Bradley, would support a full closure until next year.

Restaurant owner Scott Darvie, whose Sarnia, Ont. harbour-side pub normally enjoys the patronage of many American tourists, told CTV News London that although he’s lost a lot of business, he still agrees with the border closure, because another full COVID-19 shutdown would make it even harder to survive.

“If we had to shut down again and just go to takeout again, my staff would be unemployed and going backwards to me is not a solution,” he said.

Redekop pointed out that when we’re talking about the economic side of COVID-19 precautions, it’s important to keep the gravity of the pandemic in perspective.

“We’re talking about something that has killed nearly 200,000 Americans, nearly 10,000 Canadians,” he said. “It has had significant impacts on the health of people who have been infected.

This border closure is merely a “six or seven-month period of time,” he said, though he predicted it could “stretch into a year or more.”

“But think about the people who went through the Depression and think of the people and families whose lives were affected during the First World War, the Second World War — those things went on for years and had significant impact,” he said. “So I think we need to appreciate the fact that this is all about health and safety. The economy of course is important, but health and safety first.”