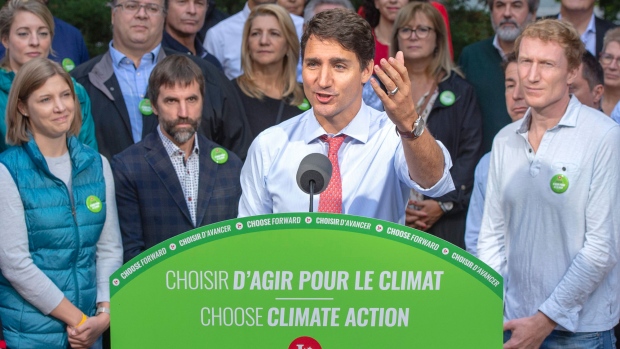 TORONTO — While on the campaign trail a year ago, Prime Minister Justin Trudeau promised that a re-elected Liberal government would plant two billion trees over the next 10 years. But so far, none of those trees have gone in the ground.

Some federally-funded trees have been planted in 2020, according to Natural Resources Minister Seamus O’Regan’s office, but the “two billion” promise referred to brand-new trees, on top of the usual replanting efforts.

Ian Cameron, press secretary for O’Regan, says that COVID-19 is the cause for the delay.

“Our government provided $30 million to businesses in the forest sector to ensure that they could safely continue their planting activities during COVID-19,” he said in a statement to CTV News. “We are also planting hundreds of thousands of trees through the Infrastructure Disaster Mitigation Adaptation Fund. These have been our priority in the past several months, and we were successful in those efforts.

“Building off these efforts, we remain fully committed to planting two billion trees, and we look forward to sharing more on that soon.”

Trudeau first made the promise in September 2019, after he met with Swedish environmental activist Greta Thunberg, and before he participated in a climate march in Montreal.

The two billion trees were pitched as an important part of the Liberals’ plan to fight climate change and achieve net-zero emissions by 2050. The party’s platform specified that it would create 3,500 seasonal tree planting jobs, and that it was all part of a $3-billion “commitment to better conserve and restore forests, grasslands, agricultural lands, wetlands, and coastal areas.”

“Nature isn’t just part of our identity as Canadians, it’s also a part of the solution to climate change and it’s a solution we can start using today,” Trudeau told reporters in September 2019.

“Trees are remarkable. They pull carbon out of the atmosphere. They are renewable and they’re sustainable and, eventually, they even recycle themselves. All we have to do is plant the first one.”

When the plan was announced, officials specified that this would be in addition to the roughly 600 million trees that are already planted across Canada each year.