MONTREAL — Just before 3 p.m. in Montreal, the often-vandalized statue of John A. Macdonald at Place du Canada in the heart of Montreal was toppled by protesters.

The protest was scheduled to demand a reduction in police funding.

Montreal police (SPVM) spokesperson Jean-Pierre Brabant confirmed that at around 2:45 p.m. the statue was toppled by protesters though police do not have any suspects at the moment.

SPVM officers asked protesters to leave the area over a loudspeaker once the statue was in pieces on the ground.

After the crowd dispersed, a perimetre was erected around the park.

No one was injured, and there were no other incidents during the protest, according to Brabant.

“The protest in general went really well,” he said. “It’s just the mischief at place du Canada that was a bit negative.”

The statue has been the target of spray paint and vanalism many times over the past couple of years, as attention has been drawn to Canada’s first Prime Minister’s treatment of Indigenous and other marginalized peoples.

Canada wouldn’t exist without Sir John A. Macdonald. Canada is a great county, and one we should be proud of. We will not build a better future by defacing our past.

It’s time politicians grow a backbone and stand up for our country. https://t.co/VdskHzFaRy 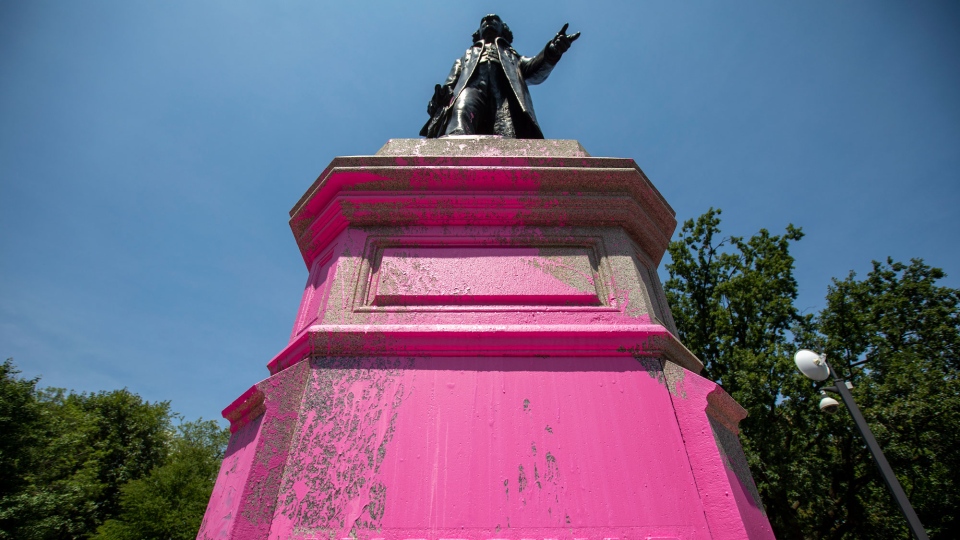 The protesters in Montreal joined others across Canadian to demand a reduction in police funding.

The Coalition for BIPOC Liberation is calling for a 50 per cent reduction in the budget reserved for the police to invest instead “in black and Indigenous communities.”

The group is also calling for the demilitarization of the police and “alternate community regulation to handle non-violent calls.”

According to the group of activists, protests will also take place in Toronto, London, Montreal, Fredericton, Moncton and Halifax.

In a news release presented to the City of Montreal last week as part of a pre-budget consultation, the Fraternite des policemen et policieres de Montréal, which represents the 4,500 police officers of the SPVM, strongly opposed the defunding, saying that reducing the police budget will compromise public safety.