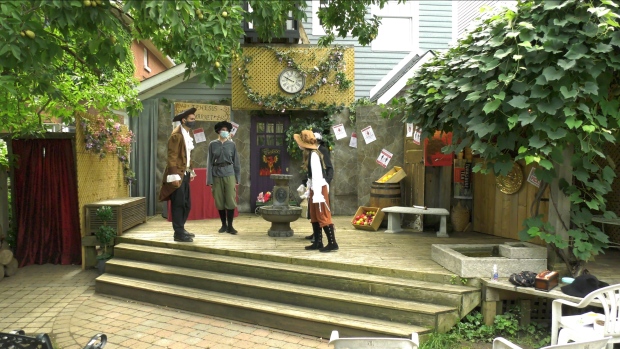 OTTAWA — An Ottawa youth theatre troupe is fighting to keep their performance of William Shakespeare’s ‘A Comedy of Errors’ in an Old Ottawa South backyard this September after it was reportedly shut down due to a “zoning” issue.

The troupe is called the Company of Adventurers and the young actors had been rehearsing “A Comedy of Errors” this summer. They planned to take donations for the Ottawa Food Bank once the curtain rose.

According to a statement from the troupe, the performers would have masks on and the small, reservation-only audience would be spaced out to comply with COVID-19 regulations; however, the performance was shut down because the back yard was “not zoned for a performance.”

“This is quite the curve ball, we are all very disappointed” said Paul Keen, one of the organizers, in a press release on Thursday.

“When I heard the news, I was kind of shocked, because this has never happened before in all the years we’ve been doing this play,” performer Paula Selskiw told CTV News.

“I was really sad, because we put all this time and effort into it, it’s really a shame that we probably can’t put it on this year,” performer Henry Barry said.

In a tweet Friday, Watson said city staff were working on a solution and offered the use of Windsor Park free of charge for the performances.

Our staff have been working on a solution and have offered the use of Windsor Park free of charge for these performances. The group has accepted this offer and will be performing there starting Monday.

Group wants to keep play in back yard

Watson said the group had “accepted” the offer to perform in the park, but speaking to CTV News on Friday, organizers say they actually want to keep the play in the back yard where the stage is already set up.

“They worked all summer, not a word of complaint, not a whisper of complaint, no one came and talked to us, we didn’t hear from the city, and then last minute after the dress rehearsal we get shut down, despite the fact that the vast majority of the neighbourhood have been super enthusiastic, the kids are really devastated, they don’t really have anything else right now,” Keen told CTV News.

“Moving it somewhere else, there’s the logistics of how much work has gone into it but there’s also the magic, and that’s what makes it so special, and that’s what’s been snatched away.”

While the letter for bylaw that informed them they could proceed indicated they were a theatre company, the Company of Adventurers insists that’s not accurate. They are not for profit and take donations at the door to raise money for select charities.

Seating was set to be capped for the back yard performance at 20 people per night, by reservation only.

According to their website, the Company of Adventurers is an Ottawa children’s theatre company located in Old Ottawa South dedicated to producing the works of William Shakespeare. It was founded in 2011 by university English professors Cynthia Sugars and Paul Keen.

“It becomes a stage, it’s not just a backyard anymore,” said actor Nora Labonte. “We’ve rehearsed here, we’ve spent most of our summer here, it’s just gonna be hard putting on a play somewhere where we haven’t rehearsed very much.”

Area councillor Shawn Menard says the City must find a solution for this case because a fine for continuing in the back yard is inapporpriate.

“I think right now, saying that they’re going to get fined if they continue on with this I don’t think is appropriate,” Menard told CTV News. “At this point we need to work together to find a flexible solution, whether that means some shows here, or offering some park space up for them to do this, or talking with the complainant to really see what is the heart of the issue here.”

“They’re below the gathering rules, well below, they’re wearing masks, they’re very respectful and so this is the type of thing we want to encourage, I think,” he said. “We just have to find a solution so that all of these parties can come together, there’s no fines issued, and we get a resolution.”

Show can go on this weekend, but keep the noise down: bylaw

In a statement to CTV News Ottawa, Director of By-law and Regulatory Services Roger Chapman said a backyard showing for family members this weekend will be permitted, but they’ll have to keep it down.

“Understanding that this is a charity event, By-law and Regulatory Services has worked with the Recreation, Cultural and Facility Services Department to provide the necessary permits to allow the performances to occur at the nearby Windsor Park,” Chapman said. “Furthermore, this weekend’s performance for an audience of family members only will be permitted to take place in the residential backyard provided that the provisions of the Noise By-law are followed.”