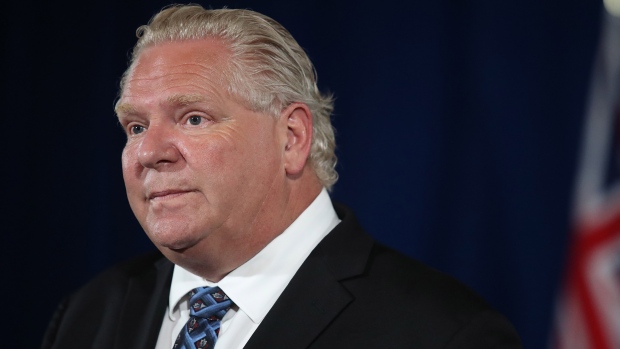 TORONTO — Ontario will be rolling back social gathering limits in Toronto, Peel Region and Ottawa to 10 people indoors and 25 outdoors as of Friday.

Premier Doug Ford made the announcement on Thursday afternoon at Queen’s Park, saying that the new rules apply to social events and gatherings held on private property or in public parks.

“We’ve seen two days this week of over 300 new cases, within a 24-hour period,” Ford said. “As a province, we have to help them, all three regions, not just to stop the spread to other parts of Ontario, but to keep everyone safe and healthy.”

Ford clarified that the gathering restrictions do not apply to events or gatherings held in “staffed businesses” or facilities such as movie theatres, banquet halls, gyms or convention centres.

Those facilities can still have 50 people indoors as long as people maintain proper physical distance from anyone outside their 10-person social circle.

The premier also said that he is proposing hefty fines of up to $10,000 for anyone who organizes a private gathering that exceeds the limits.

In Stage 2 of the province’s reopening plan, only 10 people were allowed to gather indoors and outdoors.

In mid-July, as the number of infections dropped in the province, the government increased the social gathering limits to allow 50 people to get together indoors and 100 people to gather outdoors. Health officials prefaced that other measures such as social distancing must be maintained.

Since then, the daily case count has steadily crept back up, with 293 new COVID-19 infections reported Thursday, 315 on Wednesday, 251 on Tuesday and 313 on Monday.

The majority of those cases were located in the province’s largest regions.

Local mayors in those areas have expressed concerns over the large gathering limits, saying that parties have been hosted in the city and may be contributing to the spread of the disease. Ford has previously said that local politicians should feel free to change the gathering limits or impose further health regulations, but none have done so.

Speaking at a news conference ahead of Ford’s announcement, Ontario NDP Leader Andrea Horwath said that she finds it shocking that the premier is not mandating smaller class sizes while still reducing the number of people who can gather socially.

“People will wonder what is the right thing to do when in one place you can have only 10 people but in another you can still have 25 or 50 people. It creates much, much more confusion,” she said.

Horwath also commented on Ford’s almost weekly warnings for people not to have large gatherings and to follow proper public health guidelines, saying that government appears to be “picking and choosing what advice to take” when enacting public health measures.

“I think that it’s not good enough for the premier to point fingers and call out certain groups of people. It’s the government’s responsibility to put policies in place that keep people as safe as possible.”