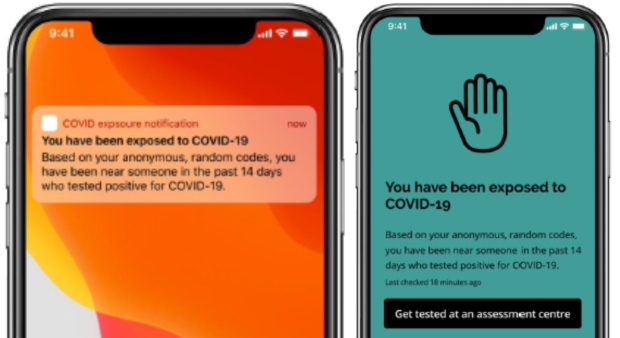 The app—called COVID Alert— will compile anonymized data and use reports from confirmed positive COVID-19 cases to notify Canadians when they’ve been in proximity to someone who has the virus.

While the initial rollout is just underway in Ontario, Canadians across the country are able, and are being encouraged to download the app in anticipation of more provincial and territorial health authorities signing on to use the new software. Talks are ongoing with other provinces to come on board in the coming days, including New Brunswick and British Columbia.

Speaking from the Public Health Agency of Canada on Friday, Prime Minister Justin Trudeau called it an “innovative” solution and encouraged people across the country to download it.

“I’ve downloaded the app this morning, and I encourage you to do the same. The more people who use it, the better it can trace, and therefore slow, the spread of the virus. In fact, health experts say that if enough people sign up, this app can help prevent future outbreaks of COVID-19 in Canada,” Trudeau said.

HOW WILL IT WORK?

COVID Alert uses Bluetooth technology to register when devices with the app may come into proximity with one another, and works in the background of users’ phones. As long as the Bluetooth function is on, users will be able to be notified.

Health authorities in Ontario will be the first to begin distributing unique codes to people who test positive for COVID-19. When that code is entered into the app, it will notify other users who may have come into close contact with that person in the previous 14 days and provide them with guidance on what they should do next.

The app is designed to be fully effective if people have already been using it for at least two weeks before they test positive for COVID-19. The app puts the onus on positive cases to enter in the code they receive from public health, rather than having the health authorities report that data on their behalf.

“We are talking about a voluntary approach here, and this is why we intend to as much as possible to put in place promotion around this… It’s the same thing as a mask or anything like that. We want to make sure that people are very conscious about this opportunity that they have to bring another level of safety around their moves,” said one federal official speaking to reporters on background during a Friday morning technical briefing, emphasizing that collective use will be essential to making the app effective.

The app considers close contact being an interaction that lasts at least 15 minutes and occurs at less than two metres apart, which will be determined by the strength of the signal from each device within that interaction.

It uses anonymized data that does not collect users’ location, name or address, phone contacts, or health information.

“No one will know who you are or where you have been,” says the federal government in a new promotional video.

However, citing protection against “cyberattacks,” Canadian servers will store users’ IP addresses for three months, or up to two years in the case of an attack. The government says this is “a standard part of how the Government of Canada protects online systems from cybersecurity threats.”

ALERT TO GET TESTED

The notification users will receive if they may have come into contact with a confirmed COVID-19 case lets them know that they are at risk of being infected and prompts them to contact their local public health agency to determine next steps.

“You’ve had close contact with someone who reported a COVID-19 diagnosis through the app. Learn more about what to do next,” reads the example of a push notification users would receive.

During the technical briefing, federal officials emphasized that it should not be considered a contact tracing app, though it has previously been described as such by federal and provincial politicians.

Traditional contact tracing—people making calls for various public health agencies to help track down anyone who may have come into contact with confirmed COVID-19 cases—will continue across Canada.

The app was supposed to launch in early July but was delayed as more testing was conducted, and some provinces have already launched their own digital tracing methods including Alberta, meaning Canada could end up with a patchwork of applications being used across the country and, as a result, limited efficacy when it comes to interprovincial spread.

In an effort to assuage privacy concerns the government has formed an 11-member advisory council of external public health, mobile app, data security, epidemiology, and privacy experts that will be regularly reporting to the government to “inform decision-making with respect to the app.”

Officials also said that there has been “extensive” engagement with the Privacy Commissioner’s office, however as of last month Privacy Commissioner Daniel Therrien had yet to offer his recommendations about the fine print of the app’s privacy and permissions settings to the government.

Therrien has previously raised concerns about the adequacy of current privacy laws to protect Canadians should a breach occur.

Among the privacy watchdog’s recommendations early on in the talks about the app were to ensure the app was voluntary; its scope and ability to monitor users’ behaviour must be science-based; the data collected is de-identified as much as possible; and that it is subject to independent oversight.

The app was originally developed by the Government of Ontario and the federal Canadian Digital Service has worked with Shopify and Blackberry on the new software, which Apple and Google have teamed up to offer.

Trudeau has previously said that the app would be “totally secure.”