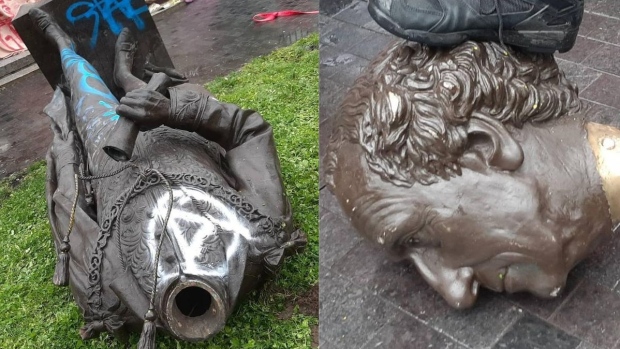 EDMONTON — A more than century-old statue of Canada’s first prime minister was pulled down and damaged in Montreal on Saturday, and the vandalism caught the eye of Alberta’s premier.

Protesters demanding defunding of police toppled the statue of Sir John A. Macdonald, which was also decapitated from the fall.

The statue was busted into pieces and then spray-painted.

No arrests were made, and police said the protesters were mostly peaceful.

Macdonald statues have been damaged or defaced across the country, as people draw attention to mistreatment of Indigenous and other marginalized peoples in the 19th century.

Jason Kenney responded to what happened to the statue in a series of tweets, calling the protesters a “mob” from the “extreme left.”

1/ A mob has torn down and defaced the statue of Sir John A Macdonald in Montreal.

This vandalism of our history and heroes must stop.

As his biographer Richard Gwyn wrote, “no Macdonald, no Canada.” Both Macdonald & the country he created were flawed but still great. pic.twitter.com/ntxqmn0G49

2/ Many of those on the extreme left responsible for this kind of violence claim that Canada is an illegitimate state, all the while enjoying Canada’s rights, freedoms, privileges & prosperity. None of those things were created by accident. They come from the vision & sacrifice

3/ of those who went before us, particularly Macdonald himself.

He was an immigrant who suffered unimaginable personal trauma throughout his life, which he overcame to forge an enormous country out of divided factions.

It’s right to debate his legacy and life. But it is wrong

4/ to allow roving bands of thugs to vandalize our history with impunity.

If the City of Montreal decides not to restore Wade’s statue of Macdonald to where it has stood for 125 years, we would be happy to receive it for installation on the grounds of Alberta’s Legislature.

“If the City of Montreal decides not to restore Wade’s statue of Macdonald to where it has stood for 125 years, we would be happy to receive it for installation on the grounds of Alberta’s Legislature,” Kenney said in a tweet.

The Montreal protest was one of several held across the country on Saturday as protesters called for police budgets in some of Canada’s biggest cities to be slashed and reallocated to community groups. Similar events were held in Toronto, Calgary and Halifax.