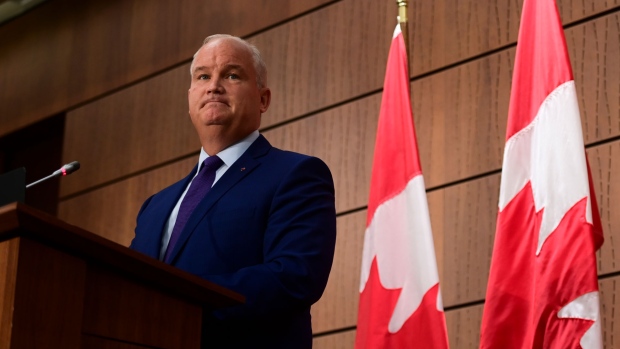 OTTAWA — As the Liberal government toils away on a throne speech and post-pandemic recovery plan, newly elected Conservative Leader Erin O’Toole is equally at work on his own response.

He’s not said whether the Conservatives will support the Liberals in the subsequent confidence vote, but even if they didn’t, it might not bring down the government.

The Bloc Quebecois says it will push for a fall election but even if the Conservatives agreed the two parties are still a few seats shy of the majority required to overtake the Liberal minority government.

Still, how O’Toole responds to the Liberals’ plans will give a strong signal about where he intends to take his party’s own policy for the post-pandemic period — and what he will pitch to voters in the next federal election.

In an interview with Durham Radio News on Wednesday, two days after he won the leadership race, O’Toole said he doesn’t think the Liberals have any intention of working with their opponents to stave off a fall election.

“I don’t want him to have a recovery plan that is more about ideological Liberal talking points than the well-being of Canadians,” O’Toole said.

That’s why he brought up the subject of Western alienation in his first call with Prime Minister Justin Trudeau, he said.

“This throne speech he’s doing, if it adds to Western alienation, Canada is seeing risks we haven’t seen since the referendum of 1995,” he said.

“I will be very fair with him, but I will be direct. I think he is taking Canada in a very dangerous way.”

Which way O’Toole would like to take Canada was, of course, a large part of the leadership race he won in the early hours of Aug. 24.

When the COVID-19 pandemic gripped Canada early in that the race, he and the other candidates were forced to reframe some of their platforms to reflect the disaster the novel coronavirus was causing to the economic and social fabric of the country.

So, his platform does give some clues about what O’Toole would seek to do when setting Canada on a path to recovery.

A couple of caveats for those seeking to read the tea leaves: one, a leadership race platform and campaign promises do not always transition to a general election plan.

Also, O’Toole’s platform was released prior to the Liberal government doing several things that he also suggested he would like to do, including winding down the Canada Emergency Response Benefit and expanding employment insurance.

Still, here’s a look at some specific ideas he did advance as part of a nine-point plan.

There are specific measures related to COVID-19 throughout the plan, including ensuring increased testing capacity, reliable domestic supplies of personal protective equipment and using agricultural research funding to get more food grown in Canadian greenhouses.

He also promised to call a royal commission into the pandemic within 100 days of assuming office to ensure lessons learned are applied going forward.

— a reduced EI premium for any increase in $50,000 insurable earnings over the previous tax year to promote hiring, an expansion of the emergency loans program for business, and amendments to bankruptcy laws to make it easier for companies to restructure.

— turning the existing deduction for child-care expenses into a refundable tax credit covering up to 75 per cent of those expenses, though how much a family could get back would depend on their income. He’d also double the limits under the existing deduction, and extend the boost the Liberals gave to the Canada Child Benefit until the end of 2021.

— he’d give broadband internet providers a tax credit to cover the cost of replacing Huawei components on 5G infrastructure; review the tax code to simplify and flatten taxes; a new law to ensure free trade across provincial borders.

— A National Strategic Pipelines Act to speed approval of pipelines considered in the national interest, which he defined as “lines providing access to global markets or domestic refinery capability, especially petrochemical refineries producing the materials essential to PPE production.” He also suggested he’d work with the U.S. and Mexico to strike a deal to end the importation of oil from outside the continent.