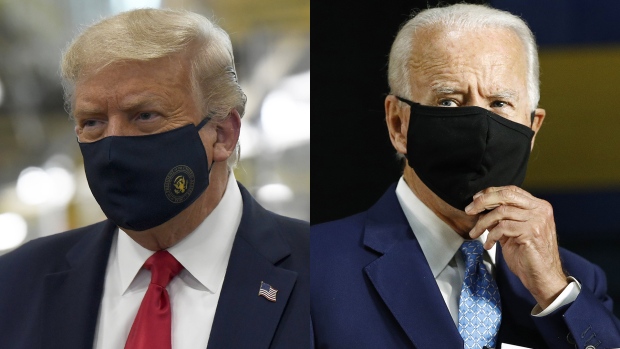 OTTAWA — The months-long pandemic has catapulted the hotly debated issue of American health-care reform to the forefront of political discussion and as the election nears, experts say its likely to intensify.

The U.S. remains home to the highest confirmed cases as well as the highest number of deaths related to COVID-19, calling into question both President Donald Trump’s response and the conditions of the country’s historically fragmented health-care system absorbing the weight of the outbreak.

Job loss from the pandemic has meant a large swath of Americans have been left without employer-sponsored insurance. The non-profit Kaiser Family Foundation estimates that up to 27 million people could lose their health plan, and while about half may be eligible for Medicaid, nearly 6 million won’t have access to subsidized coverage.

While Trump has stayed mostly mum about the devastating health impact of the pandemic, his administration continues to promise a new health-care plan that would replace the current model, just weeks out from the fall election. It’s a plan that will either guide the country through the next four years in which reining in the virus will be a key priority, or it will die on the evening of November 3, being replaced instead by that of his Democratic rival.

Over the course of the last three-and-a-half years, Trump’s health-care plan has been as much about reversing former president Barack Obama’s policies as it has been about advancing a new vision.

Trump’s commitment to overturn the Affordable Care Act (ACA), known as Obamacare, has remained steadfast since he announced his presidential run in 2015.

He gave himself an aggressive timeline to start making changes, pledging that “On day one of the Trump Administration, we will ask Congress to immediately deliver a full repeal of Obamacare,” read his campaign website. In reality, it took many months before Republicans put forward a series of proposed amendments which were ultimately shot down.

ObamaCare is a total disaster. Hillary Clinton wants to save it by making it even more expensive. Doesn’t work, I will REPEAL AND REPLACE!

Critics of the ACA says it’s too costly of a system and still leaves a significant number of Americans uninsured. Republicans have notably taken issue with changes to the marketplace system which has those who can afford to buy directly from an insurance provider help fund subsidies for those that can’t.

“There has never been a Republican replacement plan for the Affordable Care Act and even what they were voting on in 2017 wasn’t really a soul replacement,” Rovner said. “There was basically shells and an outline and Trump keeps promising he’s going to have a plan and then it never shows up in three-and-a-half years.”

Trump committed in late July in an interview on Fox News that his team’s health-care platform would be revealed in two weeks. He later pushed the deadline back to the end of August, and as of publication, no plan has been released.

His administration has been forced to focus their talking points over the last eight months on health-care-related activity though, as a result of the pandemic. Trump has touted the country’s testing capabilities, saying it’s the cause of higher case count reporting. He has also praised his team’s efforts for shutting off travel with China, securing medical supplies and sourcing vaccine candidates.

“While Democrats were focused on their impeachment sham, President Trump took swift and decisive action to stop travel from China in January and enhanced airport screenings to help stop cases from coming into the United States as long as possible,” reads the White House website.