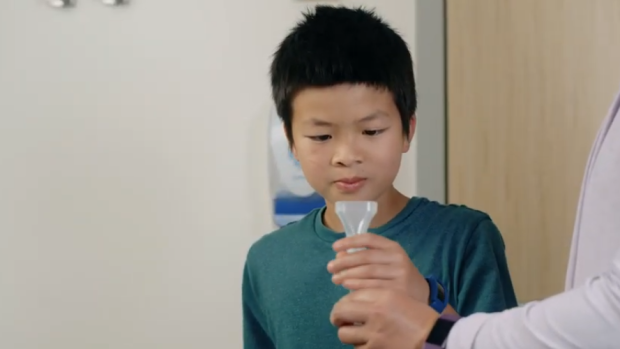 VANCOUVER — Young people who need to get COVID-19 tested in British Columbia no longer have to worry about the discomfort of a nasal swab, health officials announced Thursday.

Provincial health officer Dr. Bonnie Henry said researchers have developed a new method of testing that’s non-invasive and can be done without the assistance of a health care professional.

Henry described the test as a “mouth rinse gargle,” and said it’s already available at COVID-19 testing centres across the province.

“You put a little bit of normal saline – so sterile water – in your mouth, you swish it around a little bit and you spit it into a little tube, and that’s an easier way to collect it for young people,” Henry said.

“This is something you can do with the help of your parents, if needed, or by yourself.”

The gargle tests can be used by students between the ages of four and 19.

The new testing method arrives amid a growing number of COVID-19 exposures at schools in B.C.’s Lower Mainland, which have left many parents alarmed early in the fall semester.

Henry noted that none of the incidents recorded so far have caused an actual outbreak.

“We have had, and not unexpectedly, some staff and some students who have been in a school setting during the time when they may have been infectious to others,” she said. “None of these have been high-risk exposures and everybody has been notified who needs to monitor for symptoms.”

Officials said testing will play an important role in making sure schools are safe, and they’re hopeful that having a test that doesn’t require pushing a swab deep into a child’s nasal cavity will encourage people to be proactive.

“Getting tested as soon as anybody has any symptoms is incredibly important,” Henry said. “Taking the step to get tested is how you protect your friends, your family and your community and now for K-12 students we have an easier alternative than the nasal pharyngeal swab that has been the standard that we have been using.”

The new method is “one of the first of its kind around the world,” according to officials. Henry also noted that a B.C. company will be providing the collection tubes.

“This reduces our dependency as province on the global supply chain, which we know has been one of the challenges (of the pandemic), particularly around our lab testing,” Henry said.