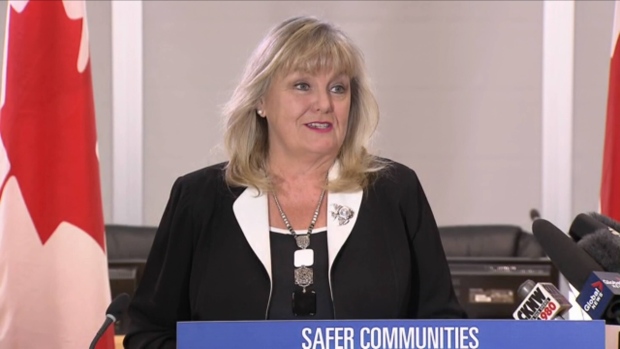 The Conservatives’ environment critic retweeted a video of Freeland interviewing billionaire George Soros when she was a journalist with the Financial Times in 2009 and commented that their closeness should alarm every Canadian.

The edited two-minute clip shows Soros advocating for then-U.S. president Barack Obama to bring China into what the financier describes as a “new world order, a financial world order.”

Soros, who is Jewish, is a frequent bogeyman of conspiracy theories from far-right figures in the U.S., his native Hungary and beyond.

In a post Saturday morning, Findlay wrote that Freeland listened carefully to Soros “like student to teacher.”

Findlay deleted the retweet Saturday afternoon and apologized, saying she never meant to endorse what she called “hateful rhetoric.”

“I thoughtlessly shared content from what I am now learning is a source that promotes hateful conspiracy theories. I have removed the tweets and apologize,” Findlay wrote.

The U.S.-based Anti-Defamation League, a Jewish advocacy organization, says in a 2018 blog post that Soros “has become a lightning rod for conservative and right-wing groups who object to his funding of liberal causes.”

“In far-right circles worldwide, Soros’ philanthropy often is recast as fodder for outsized conspiracy theories, including claims that he masterminds specific global plots or manipulates particular events to further his goals,” the ADL’s post reads.

“Many of those conspiracy theories employ longstanding anti-Semitic myths, particularly the notion that rich and powerful Jews work behind the scenes, plotting to control countries and manipulate global events.”

Newly minted Conservative Leader Erin O’Toole did not immediately respond to a request for comment on Saturday.

This report by The Canadian Press was first published Aug. 29, 2020.