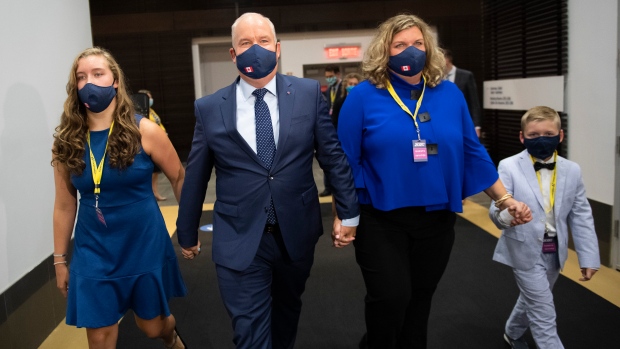 OTTAWA — Conservative Leader Erin O’Toole and his family are getting tested for COVID-19 after a member of his staff tested positive.

According to a statement from the party, the staffer was recently travelling with O’Toole.

“While he hasn’t shown symptoms, Mr. O’Toole and his family are being tested out of an abundance of caution. Other staff who were travelling with Mr. O’Toole are also being tested and will be self-isolating,” the statement said.

O’Toole’s office is also contacting everyone who the new Tory leader has recently met, which includes Quebec Premier Francois Legault, with whom he had an in-person meeting on Monday. Legault has said that after talking to Quebec public health officials who advised that because O’Toole was not symptomatic and Legault is a contact of a contact, he has decided not to isolate. He will be monitoring for symptoms.

“My family and I are feeling well, but we take COVID-19 very seriously. Today was going to be Jack’s first day back at school, but instead we will be getting tested and self-isolating per public health guidelines. The health and safety of my family and all Canadians is my top priority,” O’Toole said in a statement.

This comes after Bloc Quebecois Leader Yves-Francois Blanchet entered self-isolation with plans to get tested after his wife was confirmed positive for COVID-19. The entire Bloc caucus went into quarantine this week after a staffer in Blanchet’s office contracted the virus.

The new session of Parliament is set to get underway next Wednesday with a new throne speech. Discussions are ongoing among the government and the opposition parties as to how the new House of Commons sitting will run. Within days, an agreement is going to need to be made about whether the hybrid virtual and in-person structure will continue as well as determining if a new way of remote voting can be established.

Virtual voting could become a more pressing issue now, given that MPs from two of the main opposition parties may not be able to be physically present, depending on the timing of what’s set to be a series of key confidence votes in the days and weeks following the throne speech.

Throughout the pandemic the Conservatives have opposed the idea of remote voting. In the spring, they suggested a series of alternative in-person ways to allow MPs to vote in rounds or phases while still requiring politicians to be present for their vote to be counted.